Together Larry Gerelus and Linda Pruegger started with a 10 acre vineyard in 1992, that was planted to Vidal and Chasselas. The winery was later constructed in 1995 after the first official crush. At that time, Stag's Hollow Winery was one of only 30 wineries in British Columbia! Beginnings were humble, with a small winery built under the wine shop and home. Initial plans were to keep things simple, producing 1500 cases annually, concentrating on Merlot, Pinot Noir, Chardonnay and Vidal. Over the first five years, expansion occurred due to demand and the good fortune of working with passionate growers with similar goals to grow quality fruit.

In 2011, another 18 acres of raw land was purchased 2km north of the home vineyard. Shuttleworth Creek Vineyard, named for the creek that runs through it, is home to exciting varieties from Spain and Italy, as well as a large amount of Pinot Noir. In 2019, the winery was purchased from Larry and Linda but they remained as managers, leading the team until April of 2021, when they shifted into retirement. 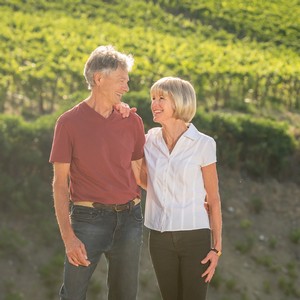 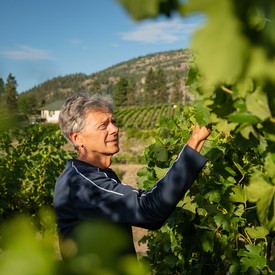 In 1991 Larry left the Oil Industry and spent the summer researching prime grape growing areas in the Okanagan. This research led him to the Okanagan Falls area, which was described by one well-known viticulturist at the time, as the “grape growing centre of the universe” for the valley. Over the past 25 years, Larry has worn the hats of winemaker, viticulturalist, marketer, builder and fixer of almost anything that needed to be fixed! His philosophy has always been if you grow quality in the vineyard, making great wine will follow. He was always striving for balance, sustainability and a holistic approach to growing grapes. 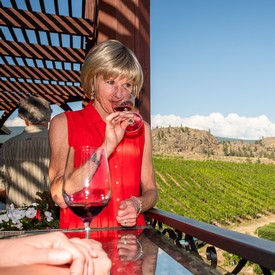 Linda moved from a role of selling and transporting crude oil to producing and selling wine. Her dream of living in the foothills west of Calgary took her a little further west to the hills of the Okanagan Valley. Since 1995, like Larry, Linda has been involved in every aspect of the winery and vineyard, from pruning and suckering, to crawling inside tanks. In more recent years she spent more time in the wine shop or the office. And always by her side were her two winery poodles - Sauly and Pinot, and more recently the newest poodle puppy, Banjo.